The original was commissioned by kayak historian John Heath, and was built by Emanuel Kornielesen of Illorsuit. John's kayak was never covered with skin, so it was never used. I surveyed the frame in Houston, Texas in 2001, and built a replica of it in 2004. The original was put together with lashings as well as metal nails-- as was the replica. This kayak measures 16'3-1/2" long, 21-7/16" wide, and has a depth to sheer of 8-1/4". My replica of this kayak is dedicated to John's memory-- he has had a profound influence on my work and life. The original frame now resides with kayak scholar Greg Stamer of Florida.
A scale drawing of this kayak appears in Kayaks of Greenland. 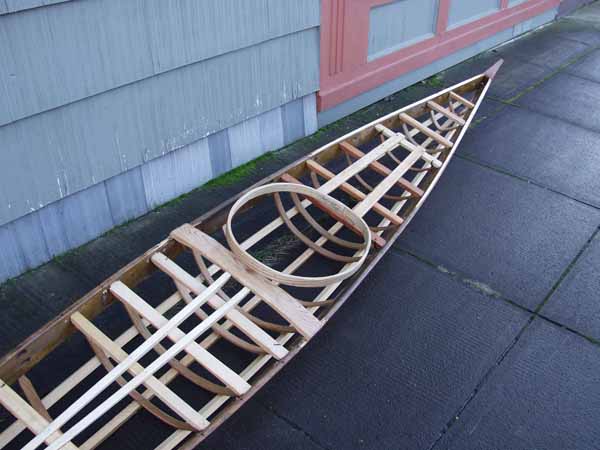 Forward interior view of the "E.K." replica. The gunwales are recycled from an earlier
project, hence the extra mortises and aged appearance.