CARIBOU INUIT KAYAK REPLICA
This is a replica of a Harvaqtuurmiut kayak collected by the Fifth Thule Expedition in 1922 on the lower Kazan River. The orginal is preserved in the Danish National Museum (catalog number P.28.123). The kayak measures 18' long and 15-1/8" wide, with a depth to sheer of 8-5/16". 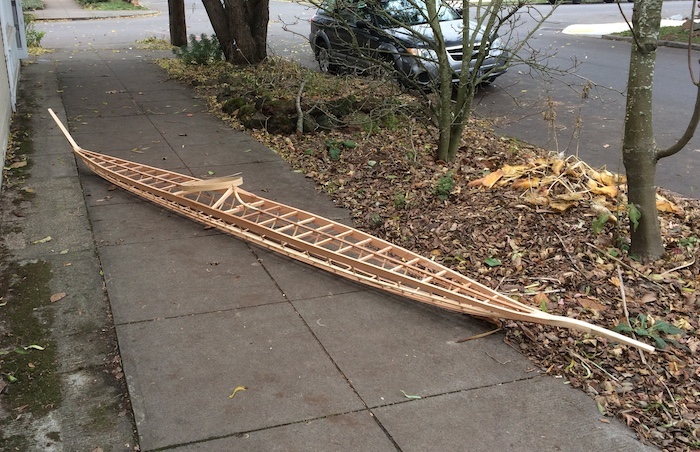 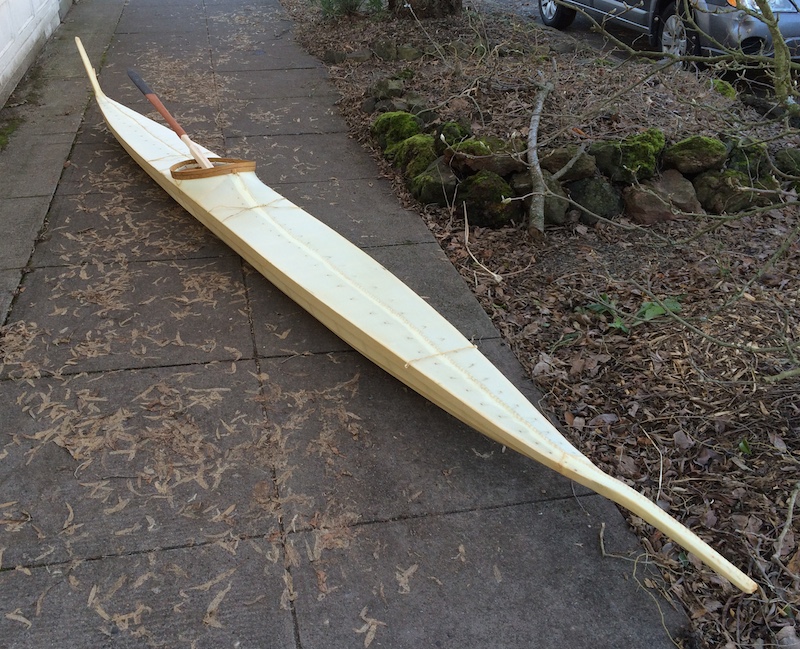 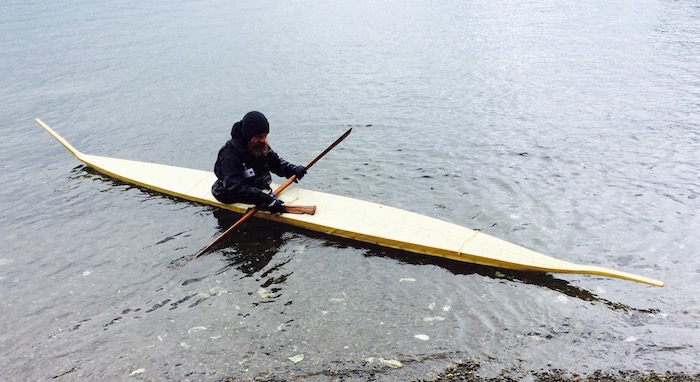 The following is a journal of the construction: 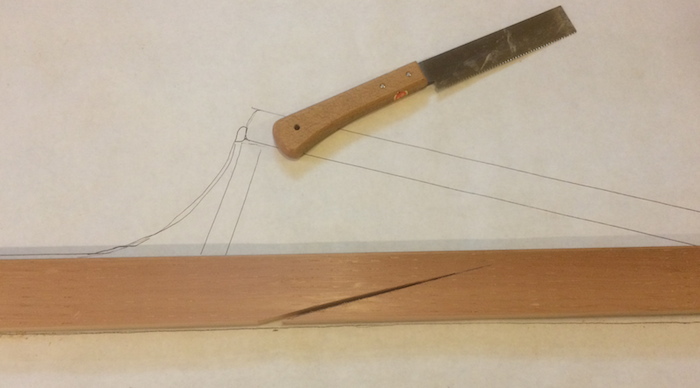 This kayak has a distinct reverse sheer, meaning the gunwales curve downward towards the ends. To achieve this, long slanted kerfs are sawn most of the way up through the gunwales.

Here, the kerfs are temporarily closed with clamps to ensure I achieved the proper shape. The gunwale is resting on a full-size lofting of the kayak. 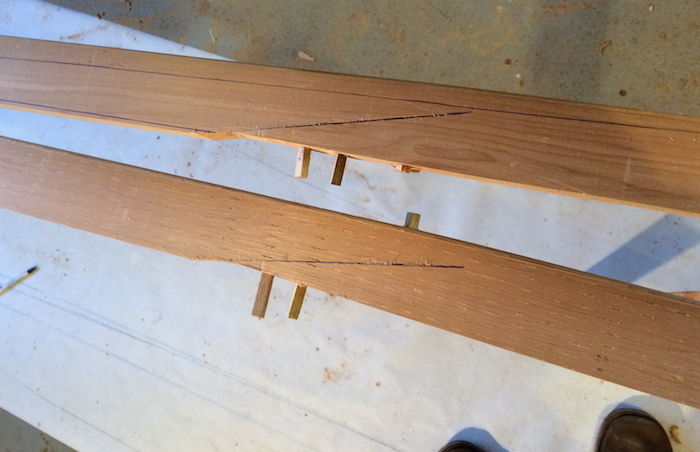 When the proper shape is achieved, the kerfs are closed up with square pegs, made from oak. Each gunwale has three of these kerfs.

Next, the gunwales are shaped further, reducing their heights here and there to match the original. 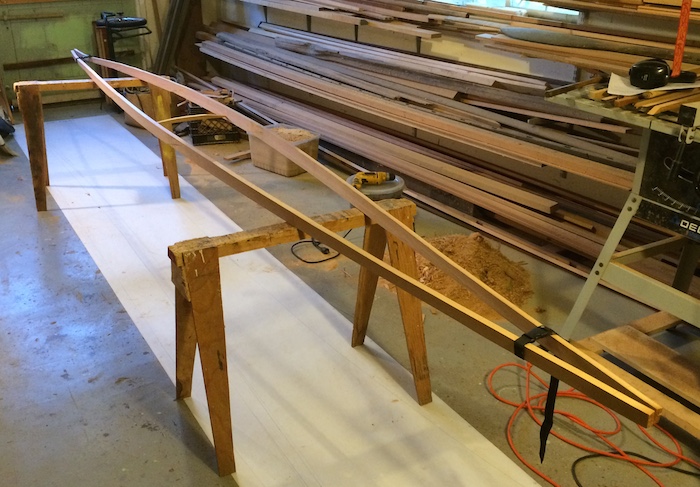 The shaped gunwales are now spread to the proper breadth, and the ends are strapped together. 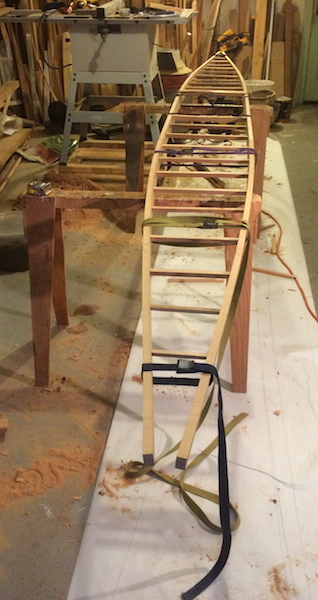 Deck beams are fitted into shallow mortises, and the assembly is held together with straps. Once all the beams are placed and the proper breadths are set along the entire structure, the ends will be closed and the straps will be replaced with permanent lashings. 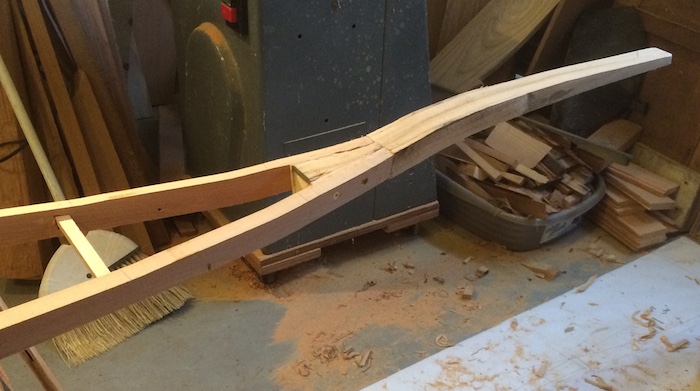 The bow is closed, with the gunwale ends being set into notches of the "ahirniq" (end horn). 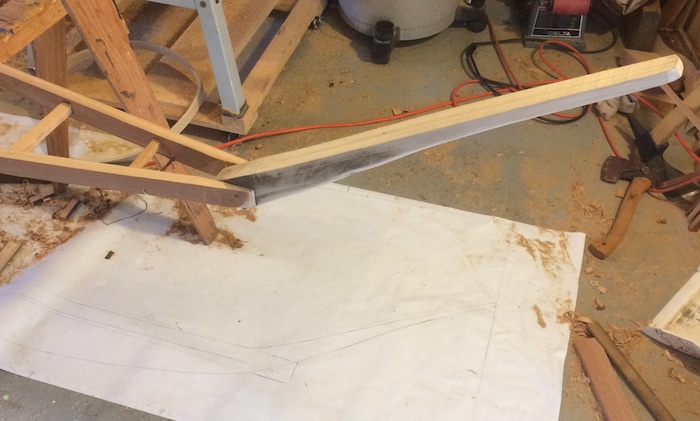 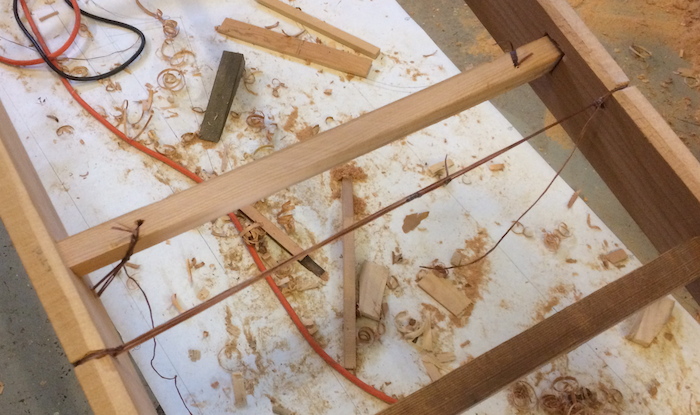 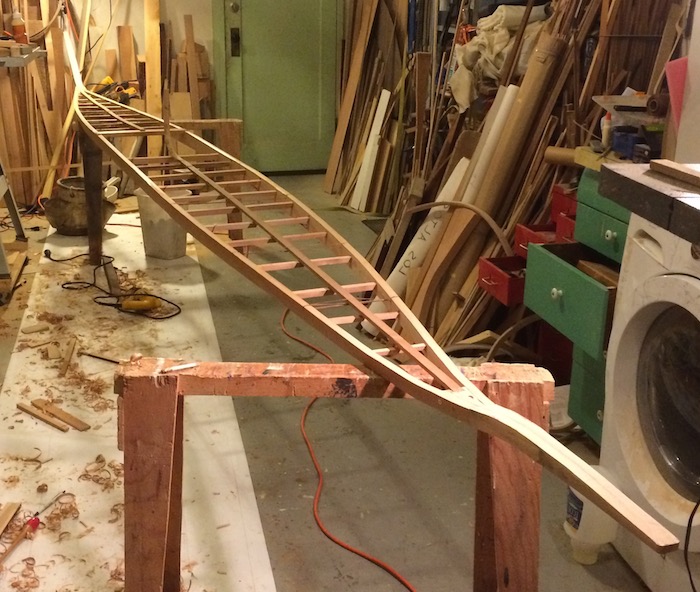 The nearly-completed upper frame. The forward cockpit deck beam is all that is missing. 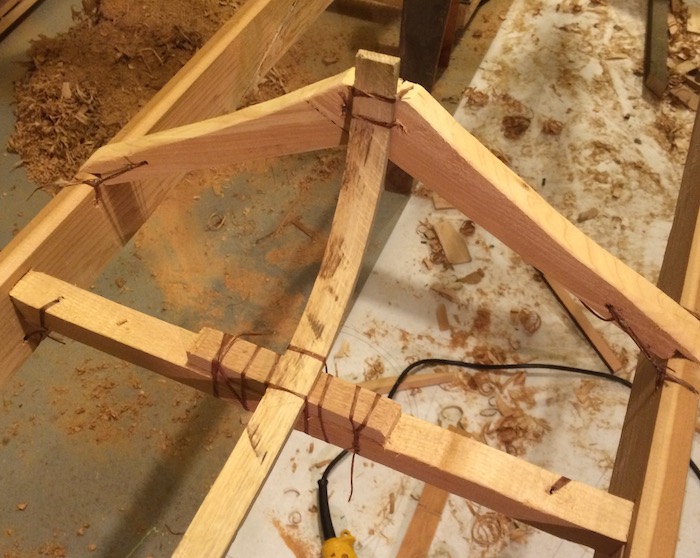 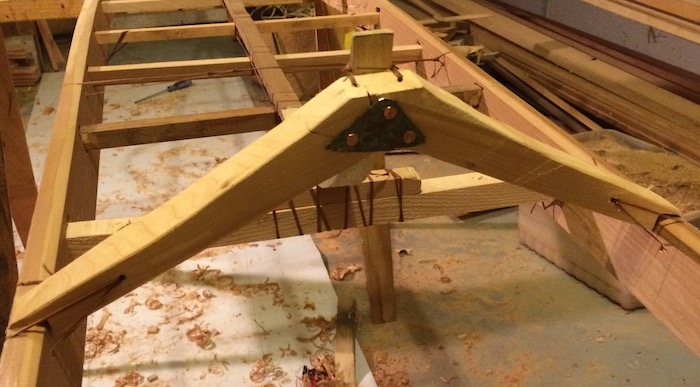 Another view of the mahik, showing its rabetted joint and copper nails and plate. 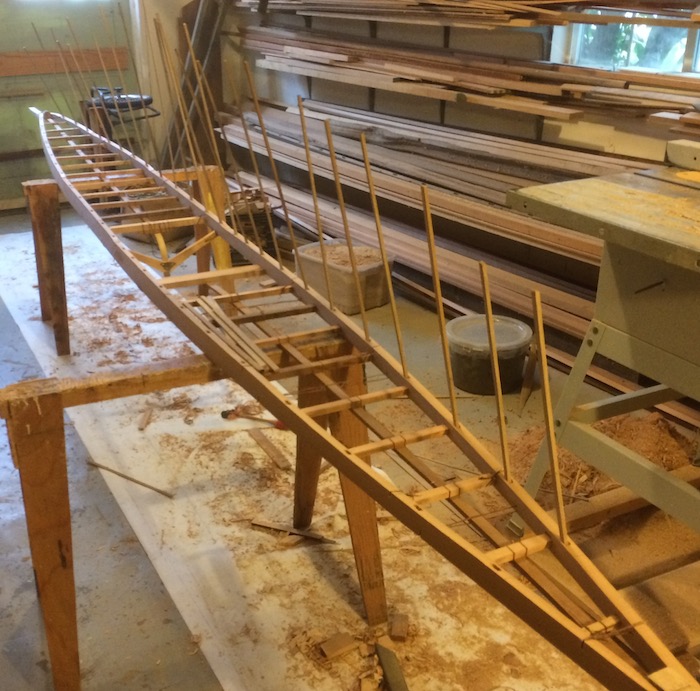 22 white oak ribs, ready for bending. They are fitted into mortises drilled into the gunwales' lower edges. Before steaming the ribs, I will lay out the keelson on stanchions to set the proper depth of the hull. 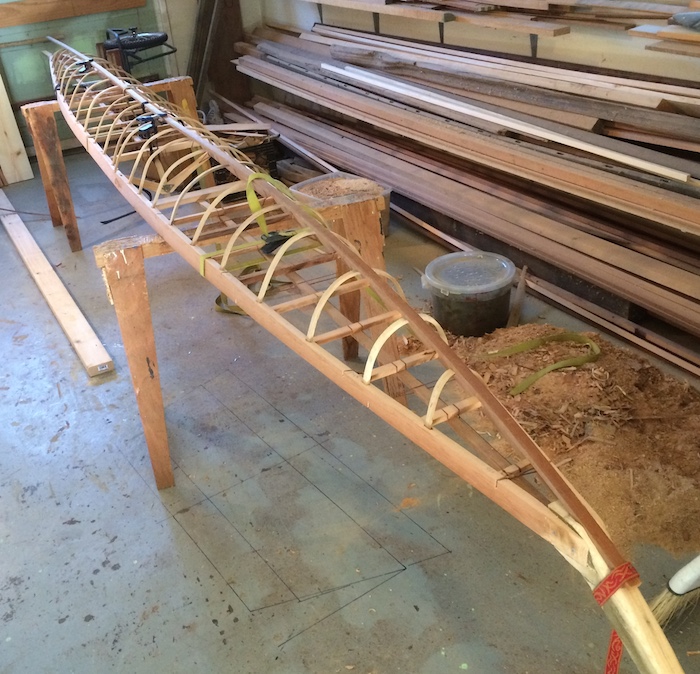 All the ribs are now in. 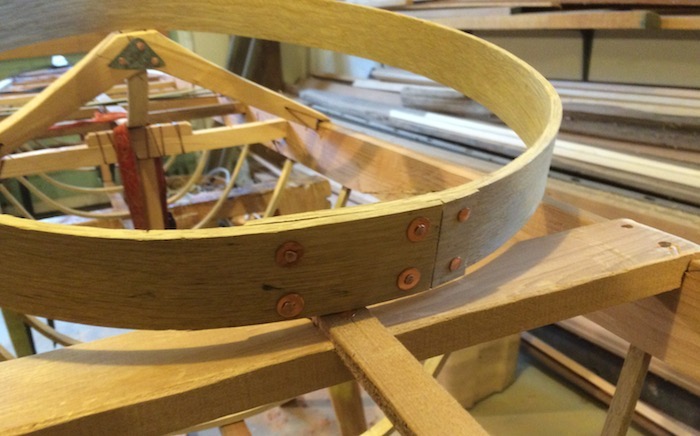 Here, the ribs are in place and a few stanchions strapped in place are also visible. With the steamer going, I decided to bend the cockpit-hoop as well. Here is a detail of the copper rivets and nails securing its scarf joint. 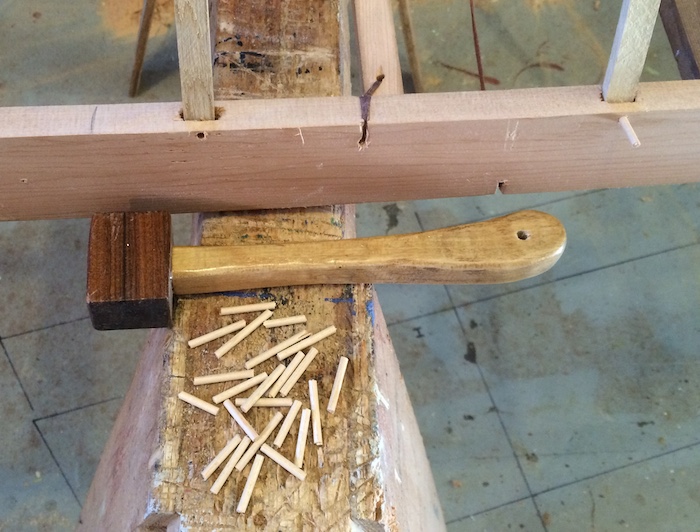 The ribs must now be pegged in place. 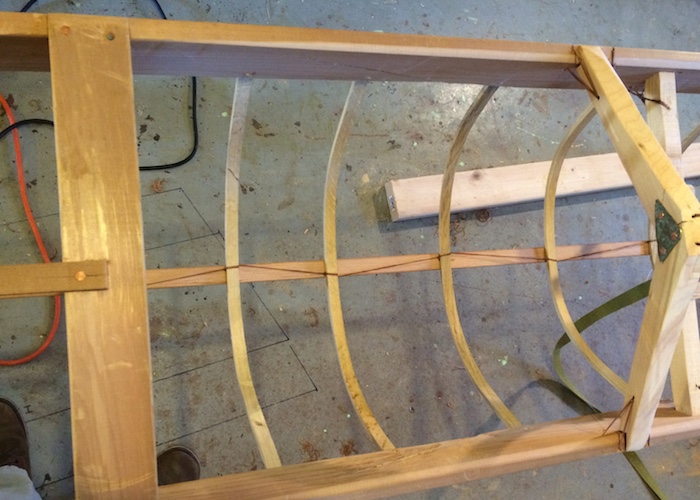 The keelson is now lashed to the ribs using a continuously threaded line that meanders along its length. 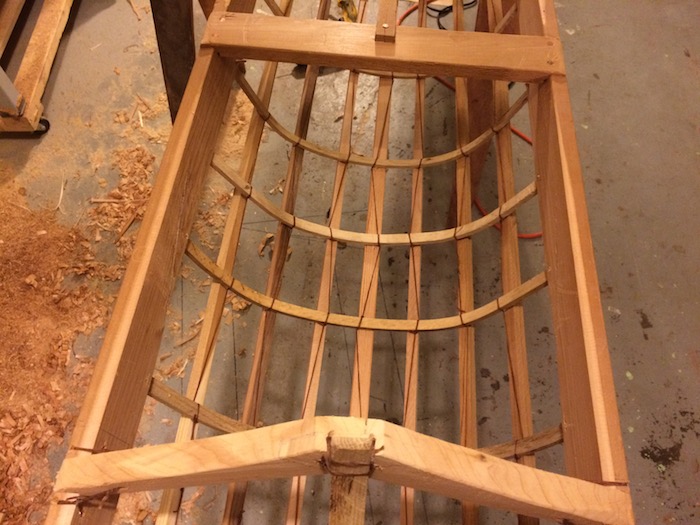 The chines are all lashed in, using the same patternas the keelson. 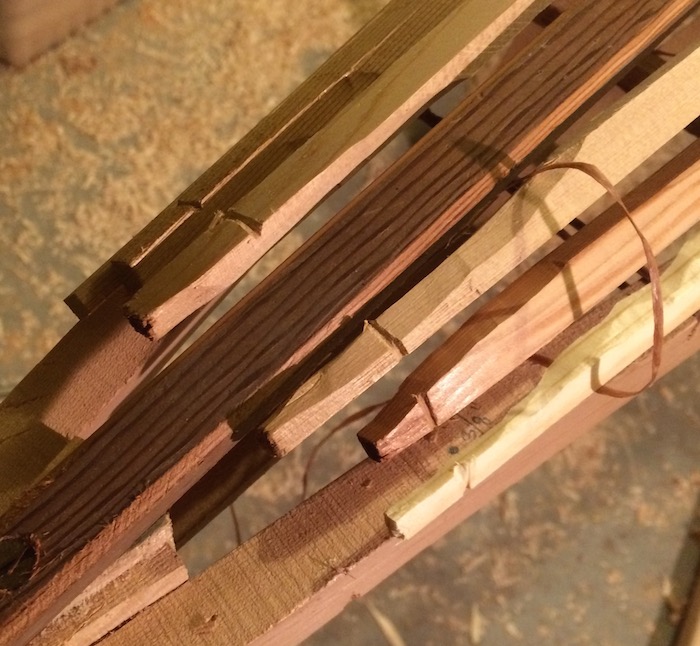 At their ends, the chines need to be drawn inward so they don't protrude into the kayak's covering. These grooves keep the lashing from slipping off their ends. 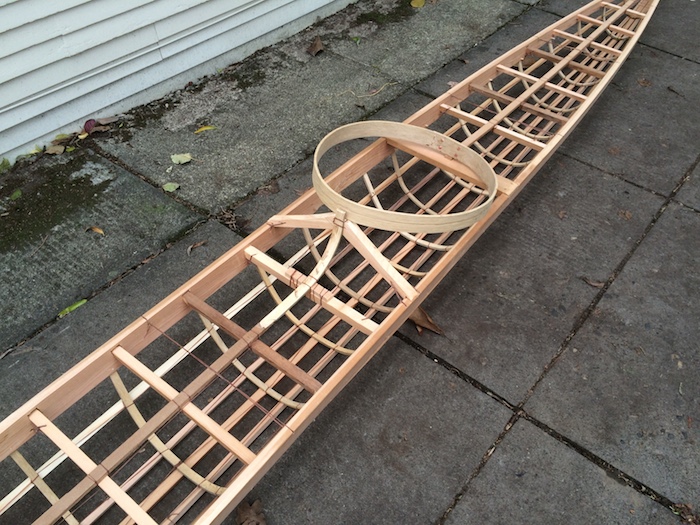 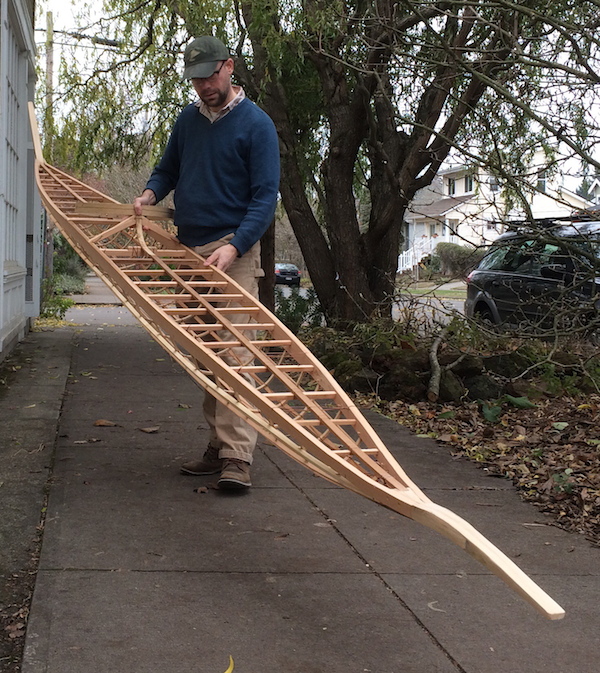 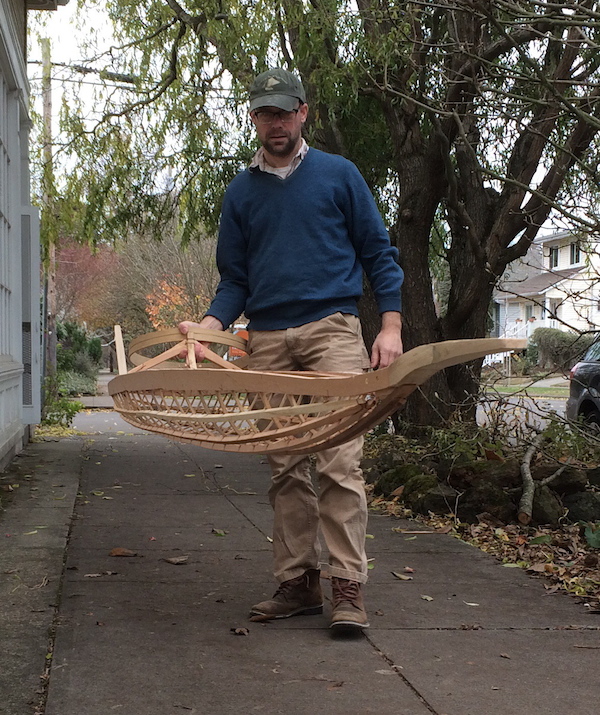 This view shows the complicated sheerline quite well. At 16 pounds, its an easy carry. 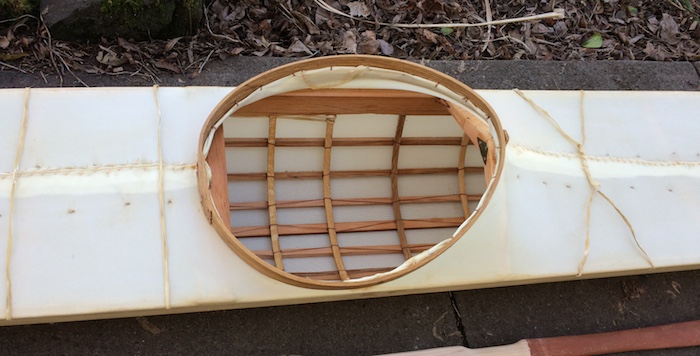 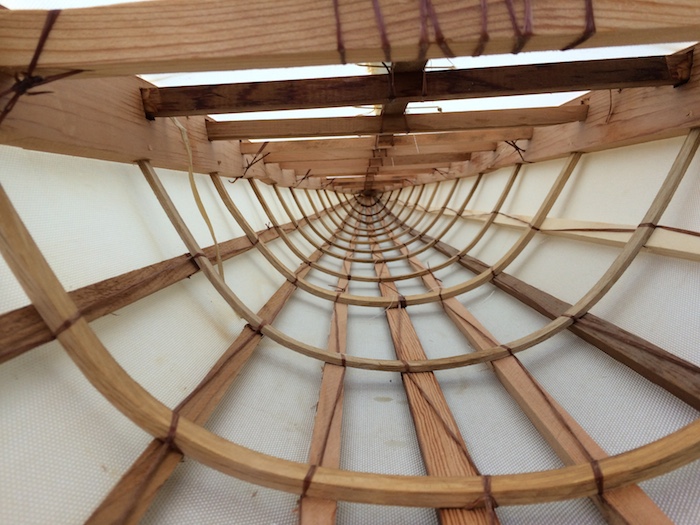